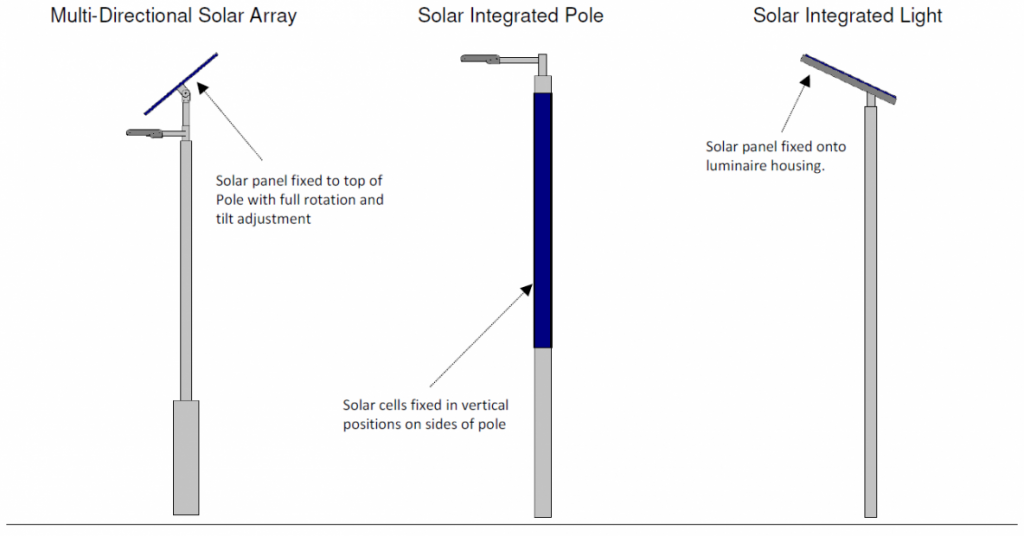 Integrating solar and battery technologies into lighting applications has become popular in recent years as it can significantly reduce the upfront costs of installation. With this, there have been various design approaches and methodologies tried for the collection of solar energy to power lighting systems.

To ensure a solar lighting installation performs reliably, it is vital that products and lighting plans are designed to correctly suit the application in which they are being installed.

Certain types of solar lights may not operate reliably in all applications and this technical paper aims to highlight the key factors to consider in relation to solar collection when selecting products for any solar lighting installation.

There are three prominent designs used by solar light manufacturers which will be used for the analysis in this paper. These types are illustrated as below: 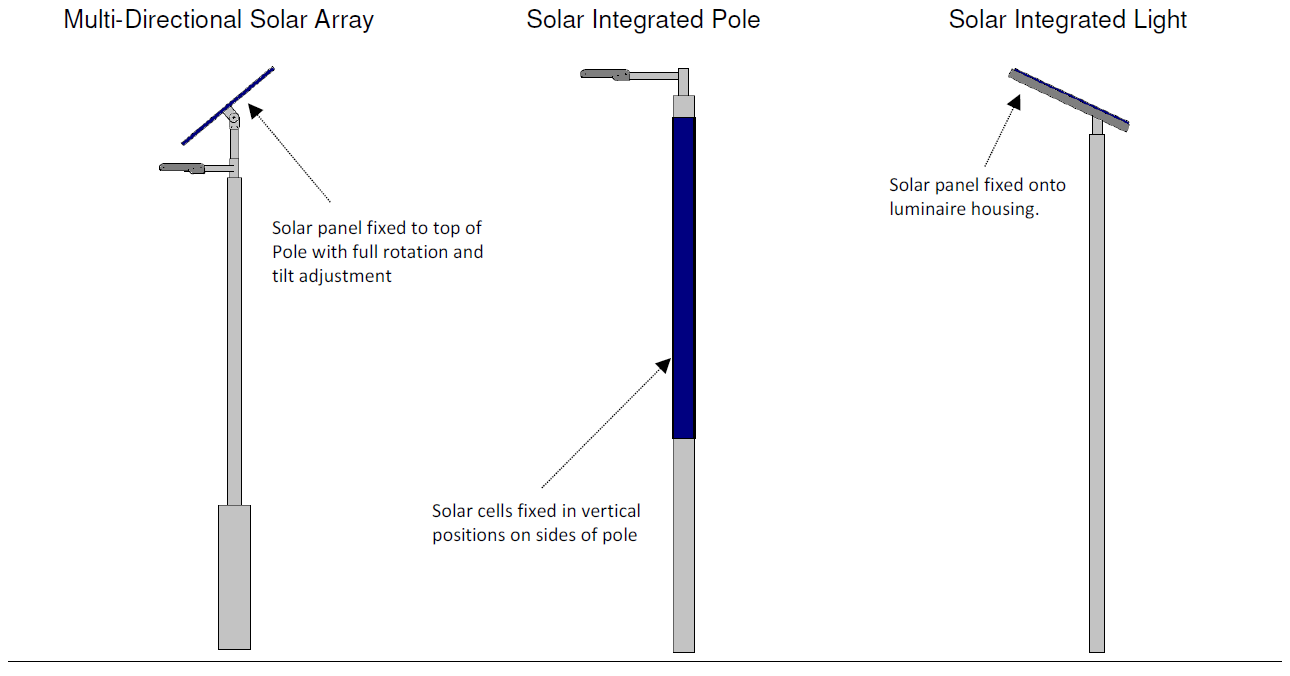 The sun rises in the east and sets in the west. During summer months, the sun tracks at a higher angle from the horizon than it does during the winter months.

For comparison, the illustration shown in Figure 2.1 below demonstrates the altitudinal angles of the sun tracking in both Summer (-10°) and in Winter (-53°) based on Melbourne, Australia. 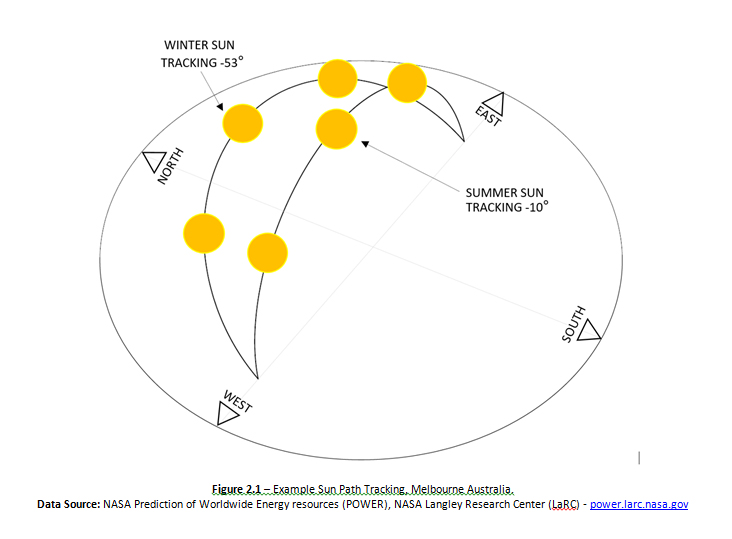 In Melbourne, during winter months, the sun tracks at an altitudinal angle that is 43° lower than in summer months which results in a reduction of power input.

Consideration of sun path tracking is imperative to ensure the long-term reliability of solar lights as they will depend on the solar panel collecting adequate sun energy during the worst months of the year. Any calculations on the sizing of solar systems must be based on the worst-case solar power input during winter months. 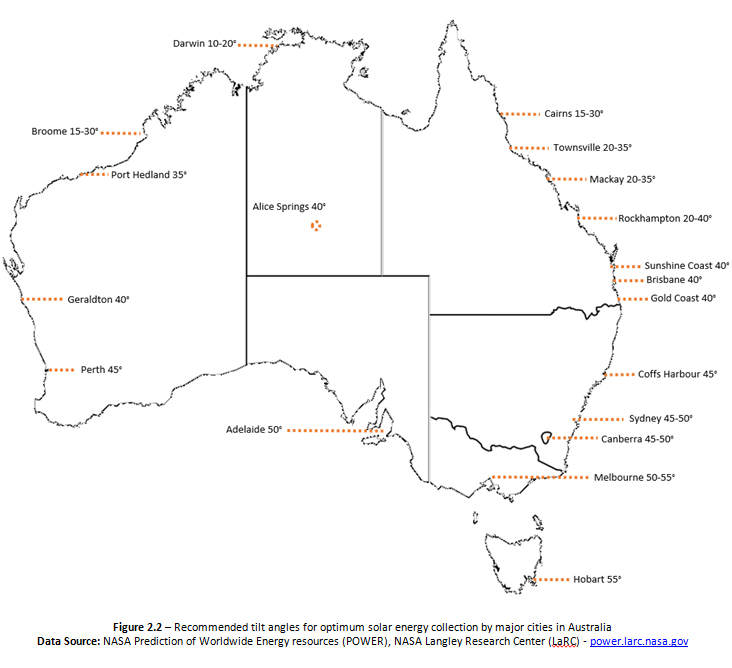 Another reason it is important to plan around Winter solar performance is the consideration of operational time frames.

During Winter months, nights are far longer than those in summer which will mean that lights will switch on earlier and off later and therefore draw more power from the solar light’s battery systems.

It also means that day-time hours are shorter and therefore there is less time for solar collection.

Refer Figure 3.1 below which presents an example of the average length of night by month for the location of Melbourne Australia. 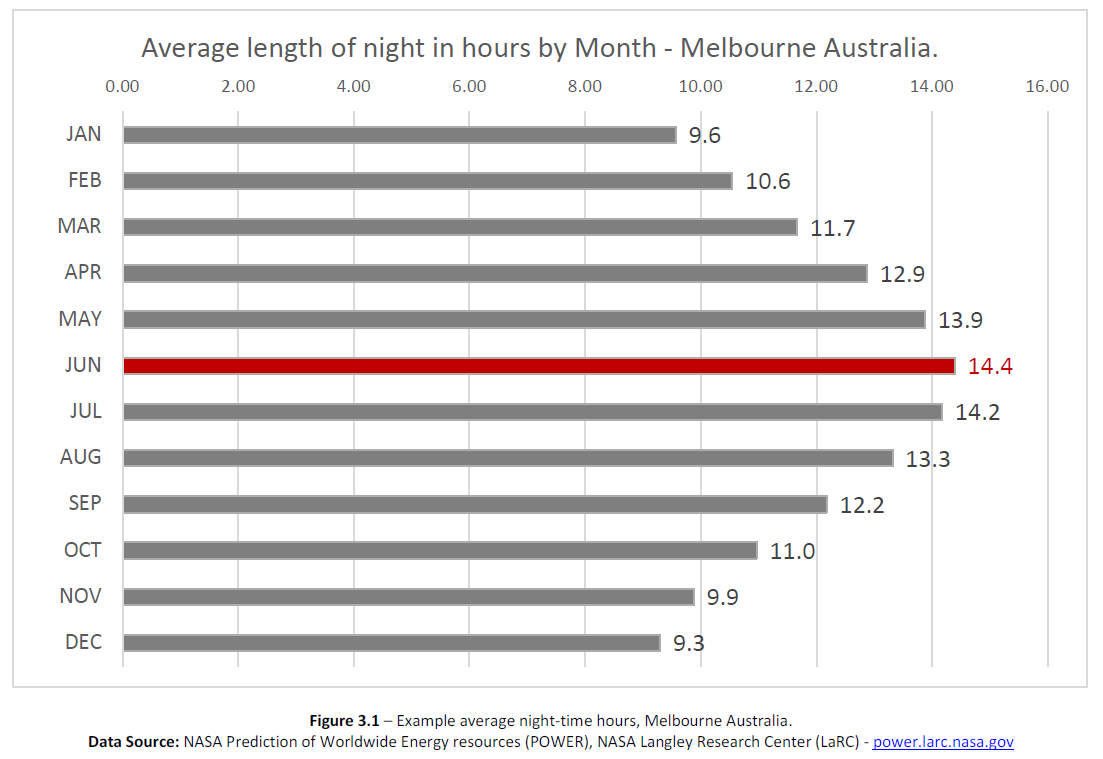 In some locations, the duration of night and other factors such as weather conditions and required autonomy levels (back-up battery storage) may influence which month should be selected for the calculation of solar collection and system sizing.

For Example: in parts of North Queensland and the Northern Territory, monsoonal conditions during summer require an autonomy period of 5 or more days therefore, calculations should be based on the worst month in terms of solar input, weather conditions, length of night and required autonomy periods.

As outlined in parts one, two, and three, solar lighting product selection and lighting plans including the positioning of solar lights should take into consideration the effective solar collection during winter months.

Suitability of products depends heavily on both the design of the solar lights being selected and the angle at which solar panels will collect energy during winter months.

The chart in Fig 4.1 below presents the monthly averaged solar radiation on equator-pointed, tilted surfaces at various angles using data for the location of Melbourne, Australia. 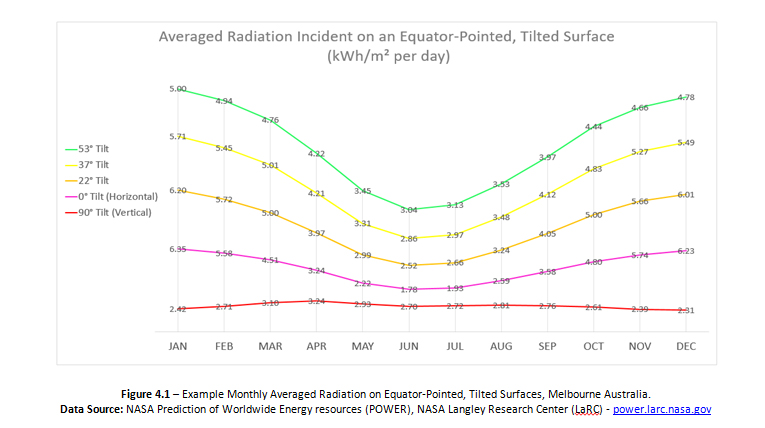 Using Melbourne, Australia as the example –

Having solar panels integrated in the body of the luminaire may be appealing aesthetically however it does pose significant practically issues.

Figure 5.1.1 illustrates how solar energy cannot be properly quantified if the solar integrated luminaire is positioned on the southern side of a pathway and tilted in the opposite direction to the suns tracking path.

This installation is only recommended if the solar integrated luminaire is fixed in a fully horizontal position and the solar energy collection is calculated based on horizontal (0° altitudinal angle) radiation data. 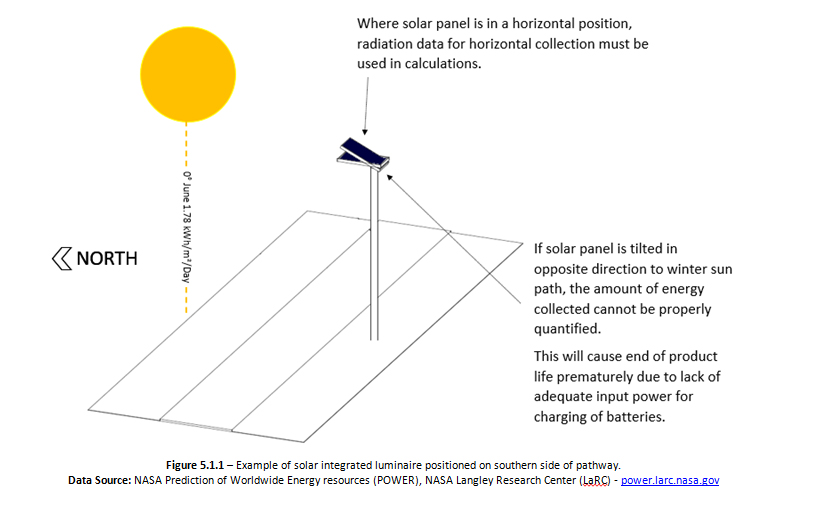 Figure. 5.1.2 presents the recommended positioning of a solar integrated luminaire. Solar energy collection for luminaires which are correctly positioned where they can sufficiently collect sunlight tracking from the north can have their energy collection calculations based on data according to the tilt angle of the luminaire. 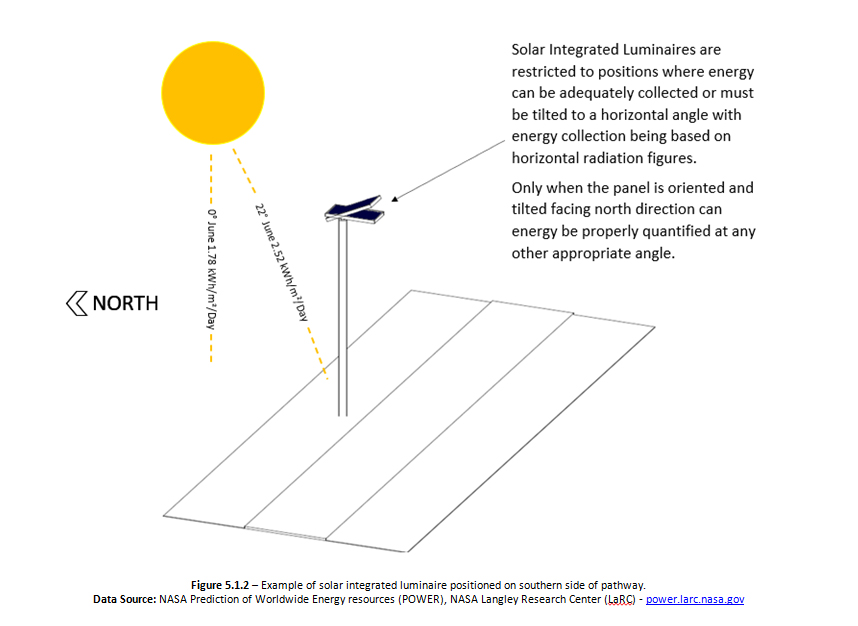 Figure 5.1.3 presents an example of a car park lighting installation with poles positioned in locations where the solar integrated luminaires are facing East, South and West. 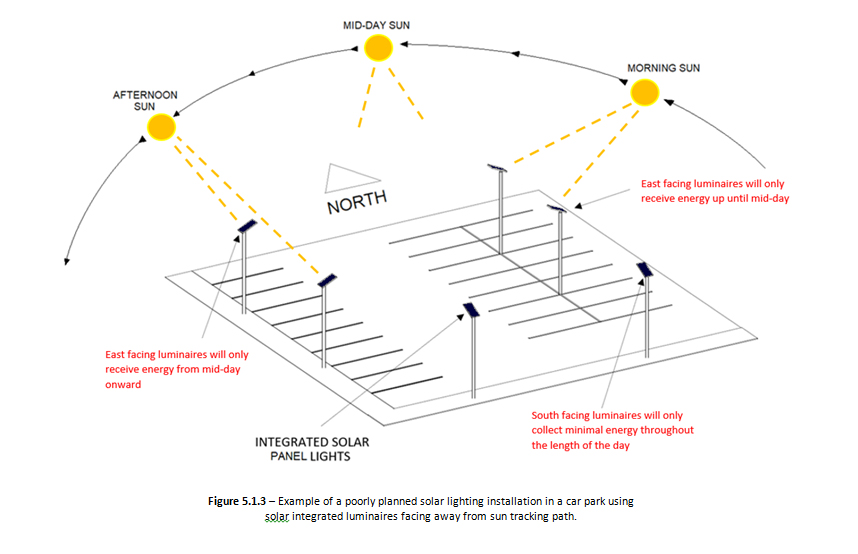 With Solar panels situated in a vertical position, the effective solar collection to be used for calculations should be based on solar radiation data at an angle of 90°.

For Melbourne, this is 2.70kWh per m² per Day. Refer Figure 5.2 for illustration 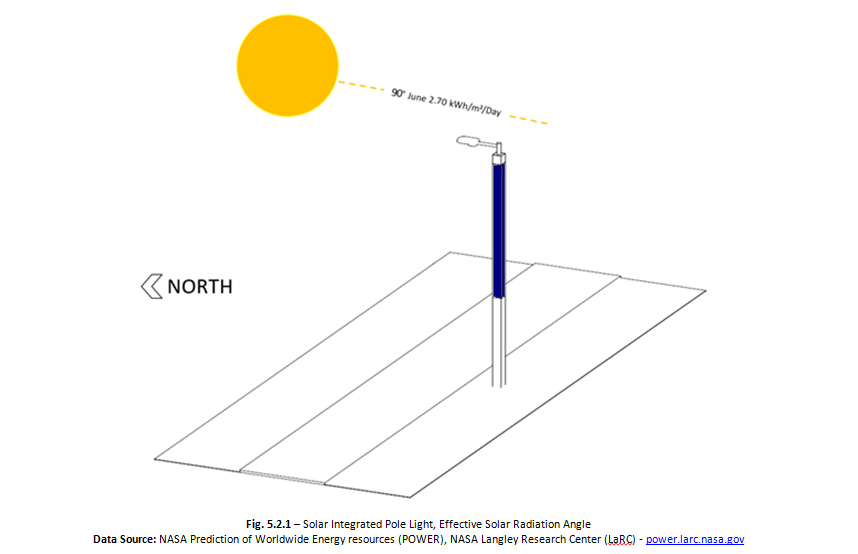 Solar Integrated Pole Lights present a unique scenario when it comes to calculating the actual effective surface area of solar collection. This is because the poles generally have solar panels on all four sides of the pole facing North, South, East and West.

As the sun tracks from different angles throughout the day, the effective collection of the solar panels will be different in the morning, mid-day, and the afternoon.

Figure. 5.2.2 illustrates the sun tracking and the direction from which the pole will effectively collect solar energy. 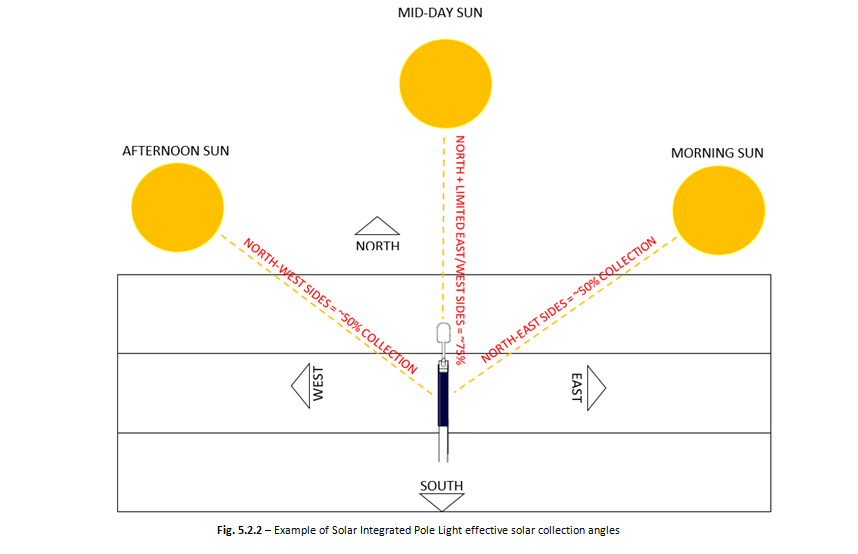 Therefore, when calculating the effective solar energy collection of Solar Integrated Pole Lighting Systems, an efficacy factor should be applied to each solar panel sides rated power according to the percentage of solar energy it will ultimately yield throughout the day.

All panel sides facing south will collect only a very minor amount of energy. 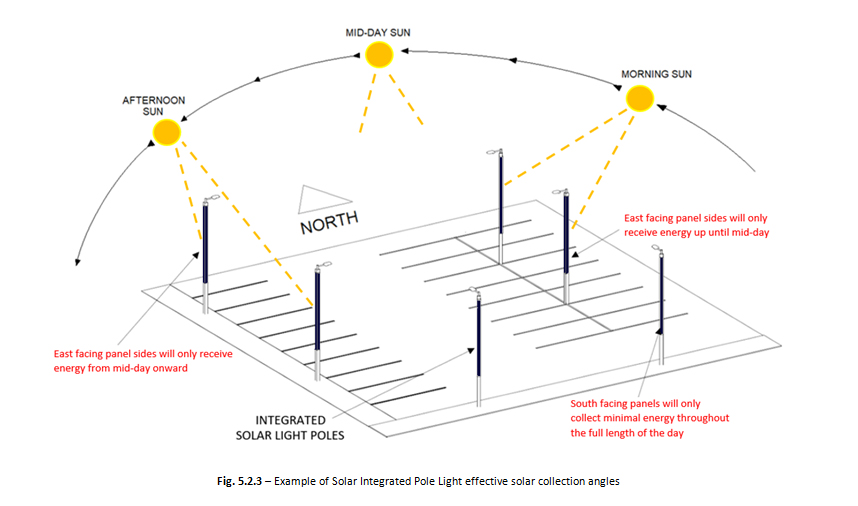 Whilst there is no recommendation against the installation of these product types in car parks, accurate solar collection data should be applied based on the amount of energy that each panel will yield.

South facing panel sides should be treated with absolute minimal solar energy yield given that during winter they will likely receive little to no effective solar energy for the entire duration of the day.

Multi-Directional solar array lighting systems offer the most flexibility and optimised solar energy collection. This is because the solar array is completely independent of the rest of the system allowing it to tilt and orient in the perfect direction regardless of the poles position and the direction of the luminaire. 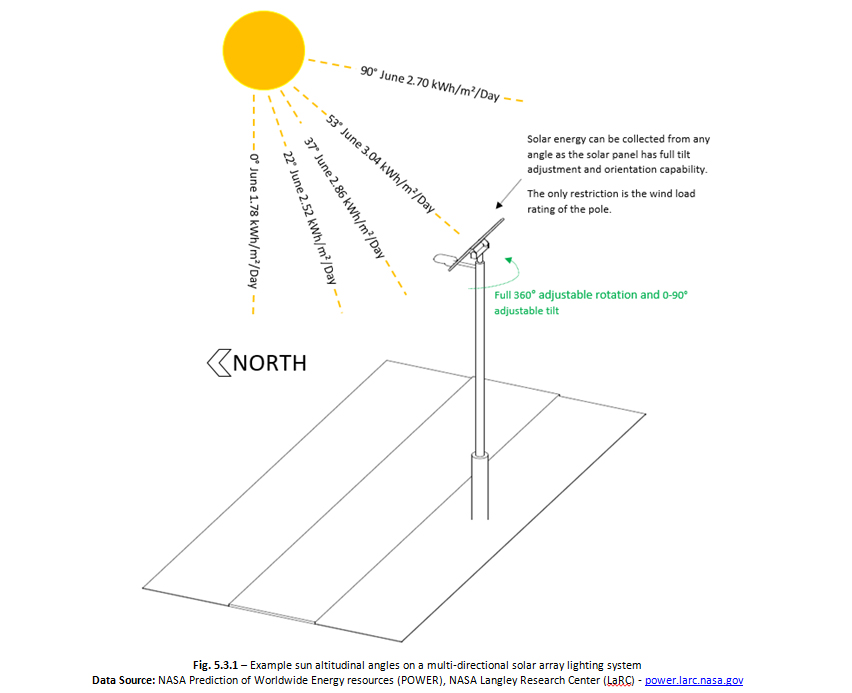 Car parks require high levels of illumination to meet lighting standards thus when using solar lights, a Multi-Directional Array type solar light is the best selection as they can collect solar energy at the optimum angle regardless of where poles are positioned.

Lights can be run at higher power levels as the amount of energy collected can charge the batteries more efficiently than solar lights that have solar panels in fixed directions which require efficacy factors to be applied or are restricted to lower tilt angles.

Refer Figure 5.3.2 which illustrates a multi-directional car park lighting installation showing how all solar panels are aimed directly to the suns tracking path at the optimal angle (53° During Winter for Melbourne, Australia) 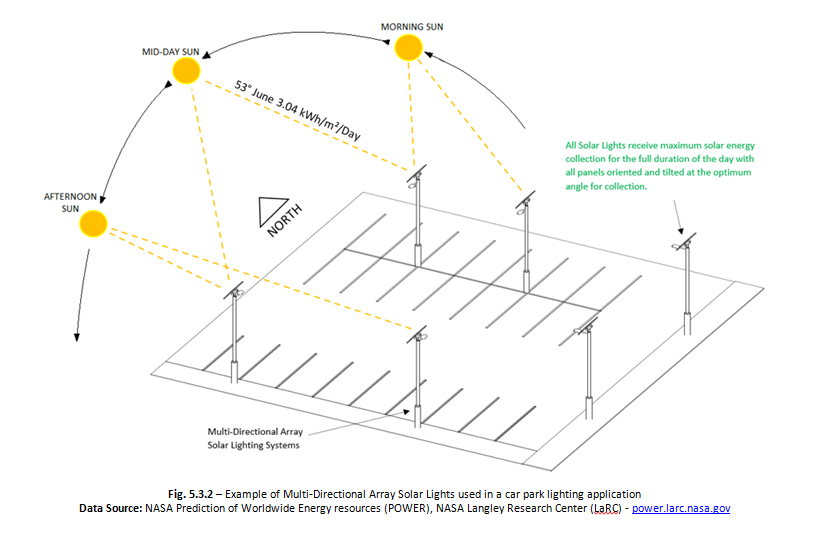 To ensure that the product selected and design plans are suitable for the application using solar lights, the following questions should be raised.